The Nightmarish Films and Music
of Dante Tomaselli

Dante Tomaselli is an American horror film writer, director, and producer who composes electronic scores to his films in addition to producing albums of dark ambient music. His albums are as sinister and surrealist as his movies, consisting of nightmarish collages of screams, eerie laughter, sound effects, and fragments of chilling synthesizer melodies.--AllMusic Guide 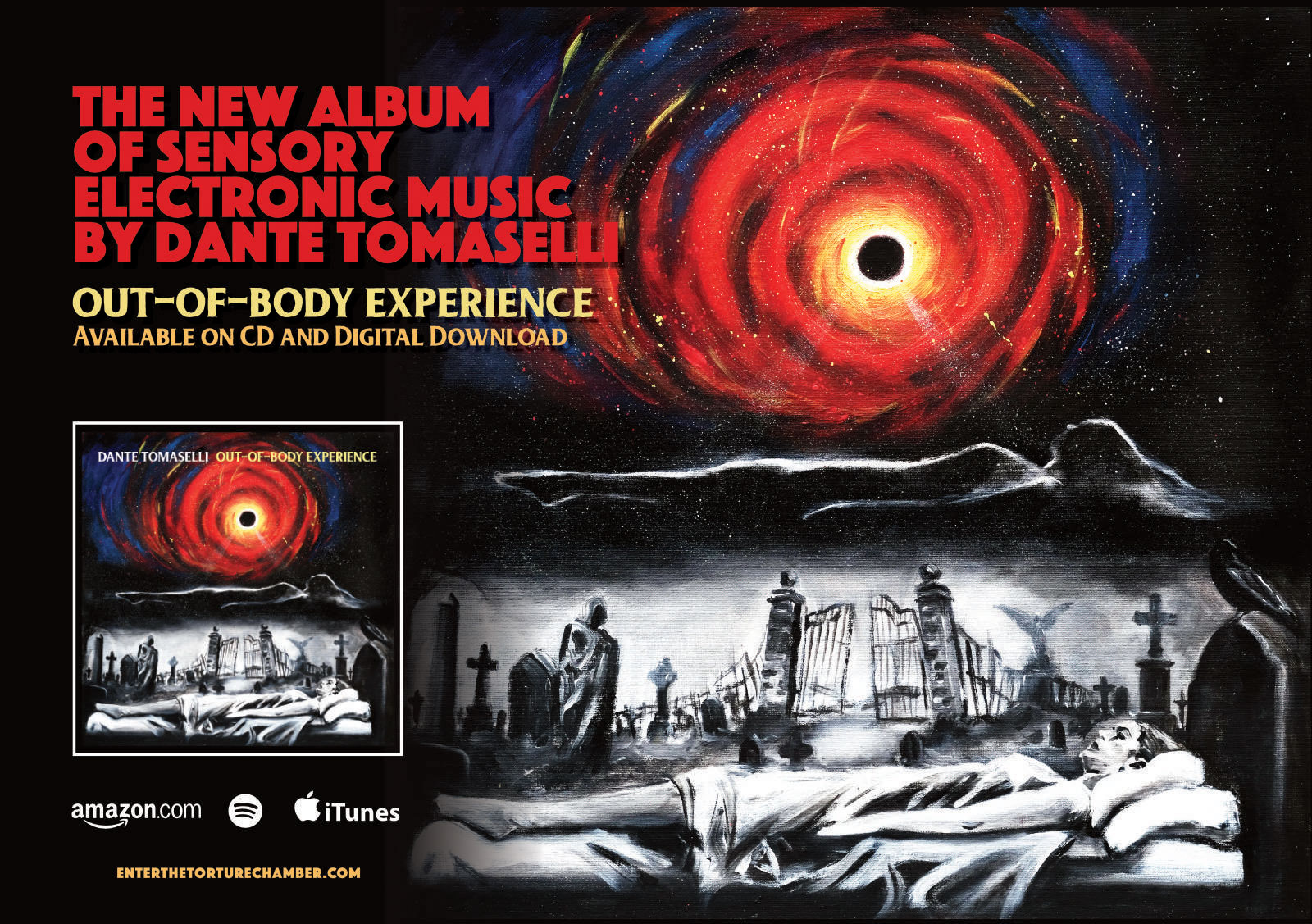 "Director Dante Tomaselli has helmed an assortment of shocking, frightening, visceral, and surreal horror pictures over the past 16 years. He has also released a series of albums that are great listening for the Halloween season or for any occasion...His work speaks for itself and if you aren't familiar with it, you should most certainly seek out any of his creations."--Tyler Doupé, Syfy.com

"Among contemporary filmmakers, Dante Tomaselli stands out as Roger Corman's most direct heir, as his cheaply made cinematic tales of terror consistently rely on stylized set pieces to produce creepy atmosphere."--André Loiselle, Theatricality in the Horror Film (Anthem Press book) 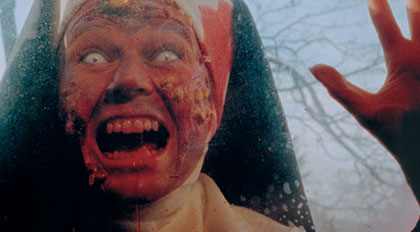 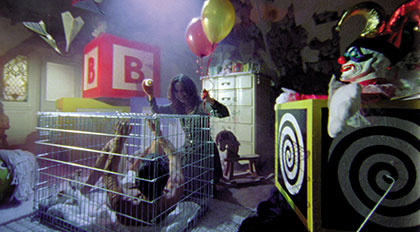 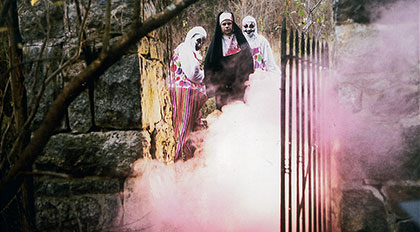 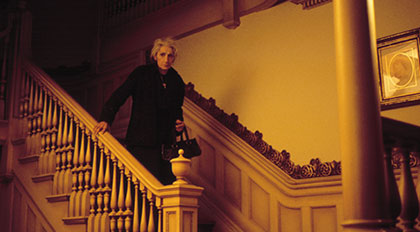 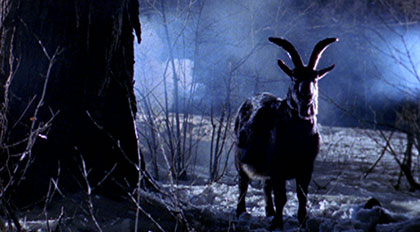 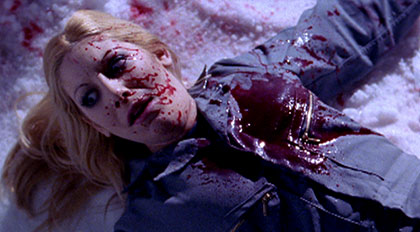 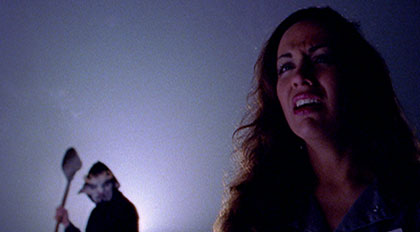 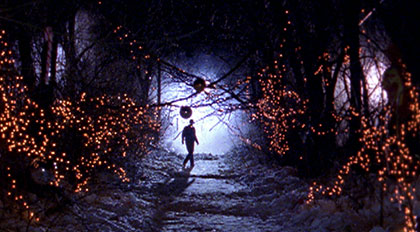 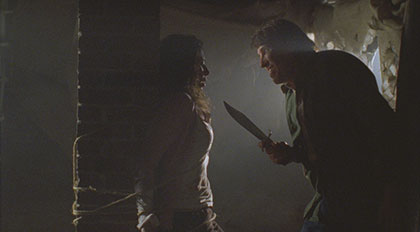 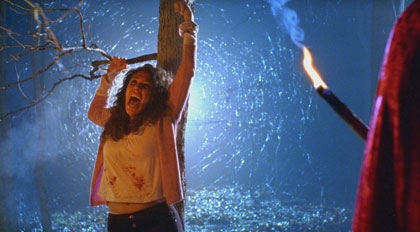 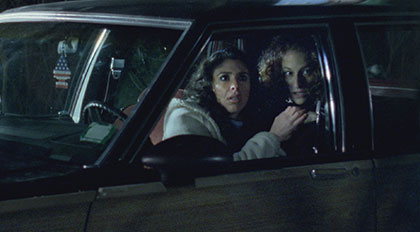 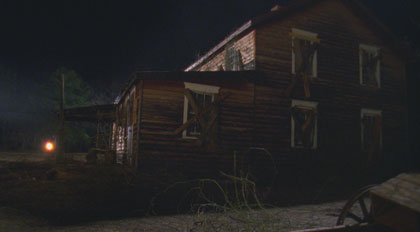 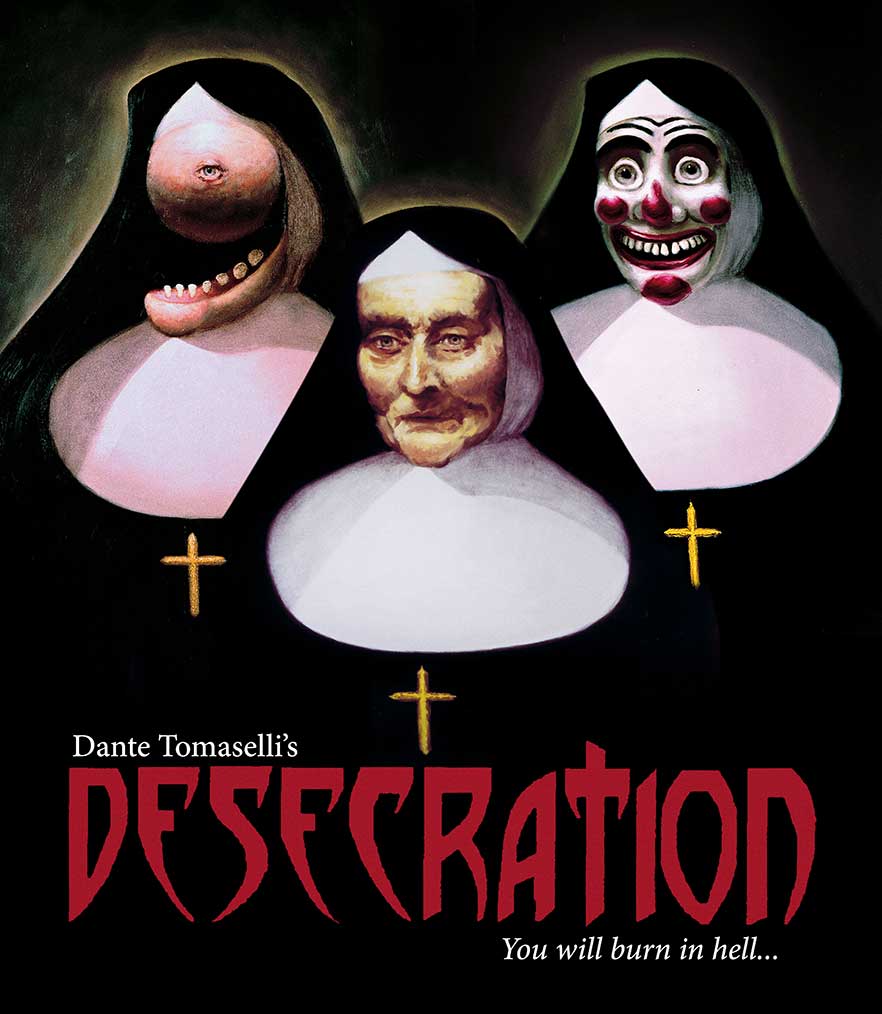 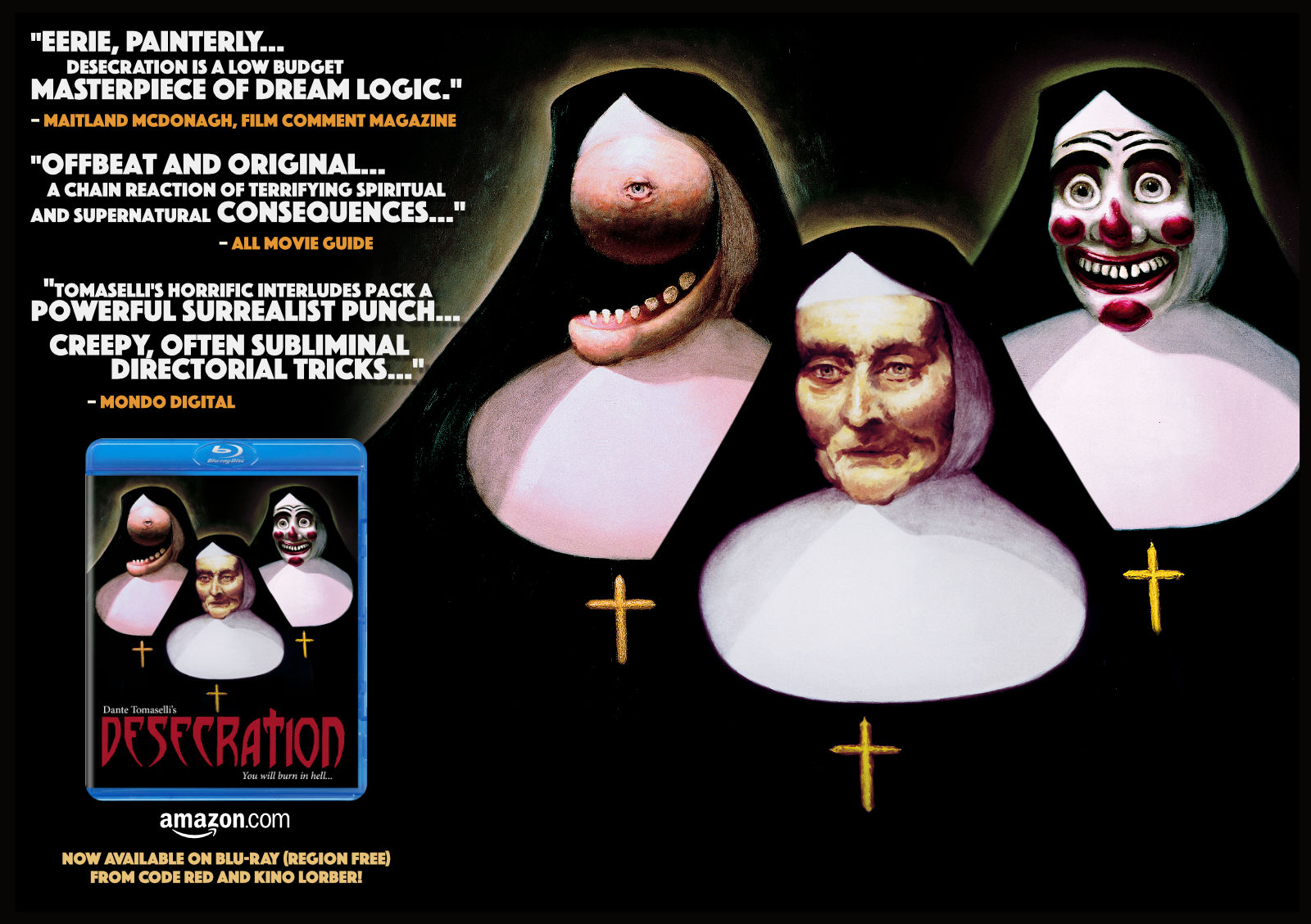 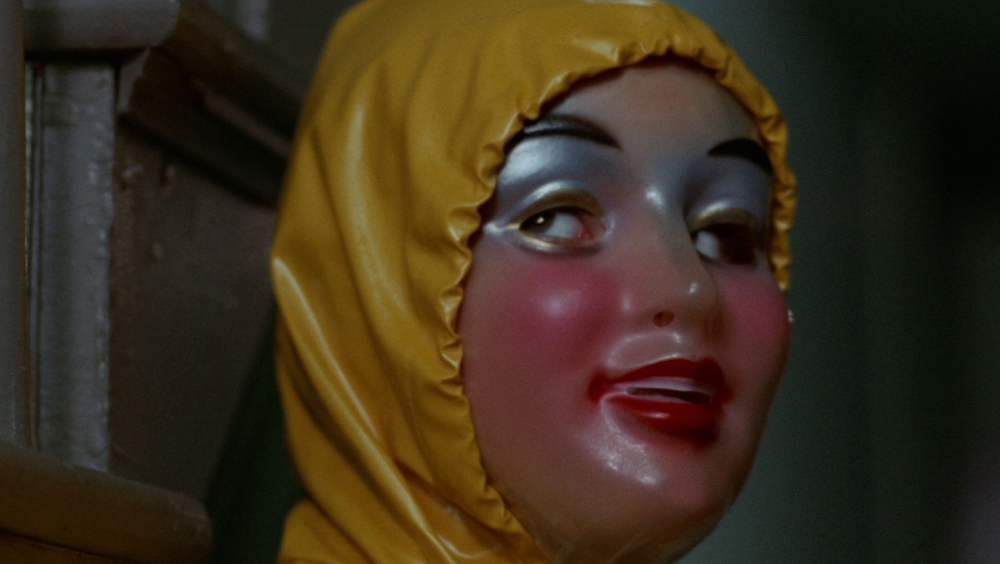 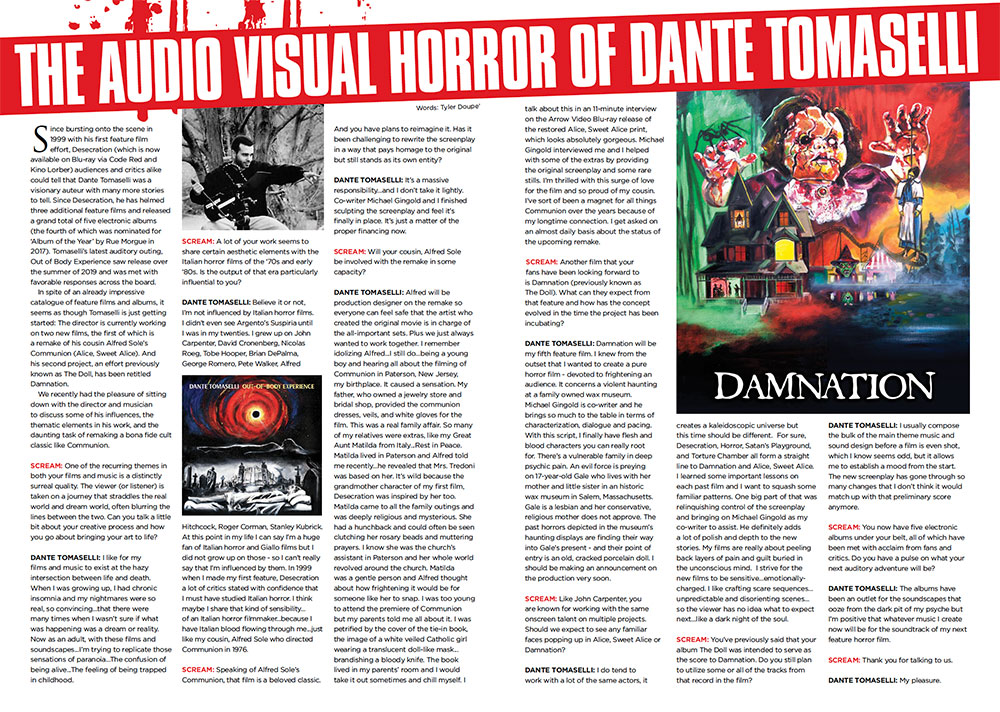 After earning his B.F.A., he released his first film, a 23-minute short called Desecration, which was screened at a variety of horror and mainstream film festivals and venues. Tomaselli expanded Desecration, which he also wrote, to feature length. In 1999, the film received its world premiere to a standing-room-only audience at the Fantafestival in Rome. The release of Desecration (1999) on VHS and DVD by Image Entertainment resulted in laudatory notices unique for an independent horror production. Made on the minuscule budget of $150,000, Desecration received instantaneous acclaim for its nightmarish visuals. The supernatural chiller quickly established itself as a modern horror cult favorite. Tomaselli has been a lifelong supernatural/horror aficionado and which was likely inspired by his cousin, Film Director Alfred Sole, whose Alice Sweet Alice (1976), made its own mark in the world of Catholic-themed horror films 40 years ago.

“In the same way that David Lynch sometimes takes us on non-narrative story arcs, I’ve always been a fan of the films of Dante Tomaselli. Stylistically, they take a cue from the Italian masters, such as Dario Argento by capturing vibrant and colorful visuals that look beautiful, but are in actuality pure nightmare fuel.”
--Rob Galluzzo, Blumhouse.com

“Horror managed to crawl under my skin and genuinely scare me. The film is filled with eerie characters, odd situations...chilling paintings, mind-bending images and it definitely plays by its own rules. Having seen so many horror movies, I don’t scare easily. Just for that, Tomaselli deserves a pat on the back.”
--John Fallon, JoBlo.com

“A wildly ambitious first feature whose lush visuals belie the fact that it was shot on 16mm for a mere $150,000...Paterson NJ-born writer-director Dante Tomaselli first made Desecration as a short film, then expanded the idea into this lavishly imagined feature...An enormously promising debut...Tomaselli's film is sometimes genuinely nightmarish — bloody nuns, killer clowns and a foggy graveyard; what a combination! — and always visually striking, not to mention genuinely creepy...Originality really does count, a lesson lost on many genre filmmakers but which Tomaselli clearly took to heart. Hollywood production designer Alfred Sole, who's thanked in the film's credits, directed and co-wrote the minor horror classic ALICE, SWEET ALICE (1978); he's Tomaselli's cousin, and Tomaselli's father, who owned a bridal store, provided ALICE, SWEET ALICE's communion dresses.”
--Maitland McDonagh, TV Guide

“What makes Desecration and Horror so frightening is the sense of dread that oozes from the surreal, nightmarish atmosphere.”
--Flipside Movie Emporium

“A deeply religious woman inflicts psychological scars on her two children...Torture Chamber builds upon the director’s earlier work and emerges as his most consistently accomplished film to date...The filmmaker has grown in style and ability while refusing to compromise his very personal and very idiosyncratic vision.”
--Troy Howarth, author of The Haunted World of Mario Bava

“Magnificently eerie use of sound...Torture Chamber is a wholly original, deeply disturbing movie with an incessantly spooky atmosphere.”
--The Aisle Seat

“A storybook fairy tale on acid, Satan’s Playground filters the familiar tale of a family car breaking down in the middle of an oppressive enchanted woods through the sensibility of emerging horror director Dante Tomaselli. The film is more in keeping with the look and feel of classic 1970's horror films, less avant-garde hallucinogenic than his previous work. Though there are plenty of images of women running and screaming through the woods (New Jersey’s tangled Pine Barrens), there’s a psychic lash of pain in the way Tomaselli shows violence...The multi-layered sound design is beautifully mixed in Dolby Surround 5.1 and 2.0, and is as crucial to the atmosphere of the film as its 1970's image quality...Tomaselli's movies are taut and fast, careening along with the camera as stand-in for supernatural force and oppressive dread...”
--Jeremiah Kipp, Slant Magazine

“All of Witches' 13 tracks are praiseworthy...Each cut ignites theater-of-the-mind wonderment, fear and the spiritual world by deeply boring into the psyche...Tomaselli has produced a fiendish and furtive album for fans of 'mood music' of a different kind.”
--Tim Ferrante, Videoscope Magazine

“The multi-talented Dante Tomaselli is a director, writer, producer and score-composer of all things horror and with his latest CD release of electronica titled, Out-of-Body Experience, he detaches your conscious mind from reality and sends it spiraling into an alternate state of scary-sensory ambiance. Fasten your seat belts!”
--Standing Room Only

“Fueled by surreal dreams and solid performances, what it lacks in budget is made up for in passion, and the result is a chilling tale of psychological horror.”
--Steve Puchalski, Sci-Fi Magazine

“A dreamlike and altogether unsettling movie that should capably jam some shivers into the spines of even the most hardened gorehound - like me. If what you're looking for is an assembly-line slasher or a giant monster on the loose, stick with the more traditional (i.e. familiar) fare on the video store shelf. Horror more than anything feels like a nightmare...It's weird and non-traditional, but it's also effective and scary and clearly the work of someone who knows their way around a spooky visual nightmare.”
--Scott Weinberg, eFilmCritic.com

“A young boy accidentally causes the death of Sister Madeline, who comes back to haunt him and the school. That simple logline in no way prepares you for the fever dream that is visionary writer/director Dante Tomaselli's first feature film. Loaded with inventive visuals (made more impressive when considering the film's low budget), and employing a style that evokes a nonstop feeling of dread, Desecration is a must see for genre fans...”
--Sean Abley, Chiller

“If you are up for the weird trip and keen on the director’s personal aesthetic of low-budget surrealism, Torture Chamber offers up a quietly unsettling excursion into hell.”
--Justin R. Lafleur, Icons of Fright

“One powerfully visual experience...The screen is filed with faceless nuns, flashing lights, flying scissors and more...From the opening scenes to the end of the film, Tomaselli combines religion, horror and the supernatural together to great effect...I highly recommend a viewing of Desecration.”
--Dvdverdict.com

“A deep drop into an audio-visual rabbit hole...Dedicated and unrelenting with just enough set up to hook you...Those who like to get lost in cinema and allow themselves to take a trip will find this film unforgettable.”
--Chris Alexander, Editor-in-Chief, Fangoria Magazine

“Writer/director Dante Tomaselli has created a unique and compelling film...with its disturbing images and wavering storyline, Desecration calls to mind the essence of EuroHorror, with a dose of American ingenuity.”
--Dvdreview.com

“Satan's Playground is the latest from horror auteur Dante Tomaselli, director of the hallucinogenic shockers Desecration and Horror...The film sees him continuing his single handed revival of honest horror values, once again proving that while so many directors love to mouth off about capturing the look and feel of 1970's style genre cinema, Tomaselli is one of the few who can do so without either showing off, or worse still, having the while film punctuated with annoyingly referential quote marks.”
--BeyondHollywood.com

“If you're in the mood for some strange Halloween sounds that push you to the edge, check out Dante Tomaselli's CDs! Part musical landscape, and part sound effect for an unsettling mood, I am struggling to describe how unique his work is. If you've seen any of his films, you'll get it.”
--Derek Botelho, author of The Argento Syndrome

“If there’s one thing that maestro of the macabre, Dante Tomaselli brings to all he creates, it’s a richness of image and a real sense of fever dream aesthetics...I honestly can’t recommend Witches enough, especially if you dig on the works of John Carpenter, Werewolves in Siberia, or Disasterpiece…it’s truly immersive horror-scape awesomeness.”
--Daniel IIIX, Thatsnotcurrent.com

“Incorporating gothic tendencies fused with the surreal use of pop-art colors...Tomaselli mainly utilizes icy blue tones and fluorescent reds in his work, drenching the landscape with an expressionist sense of the macabre. A swirling mist is everpresent, cutting up the landscape, allowing for unknown forces to lurk within the shadows.”
--Matthew Edwards, Film Out of Bounds

“Horrific ambiance...absolutely terrifying moments...Genuine scares that are definitely the stuff of the darkest nightmares...”
--Ain't It Cool News

"Dante Tomaselli has made a name for himself as an indie film director with surreal, horrifying stories to tell. But more recently, he has also been gaining recognition for his electronic music. Tomaselli’s previous musical stylings include the albums Scream in the Dark, The Doll, Nightmare, and Witches. His latest offering, Out of Body Experience takes a decidedly different approach from his previous outings...The composer's usual macabre approach is combined with toe-tapping beats and dance inducing hooks...Unholy chanting, spooky noises, and eerie sound effects set to a slick, electronic beat..."--Scream magazine

Scream in the Dark 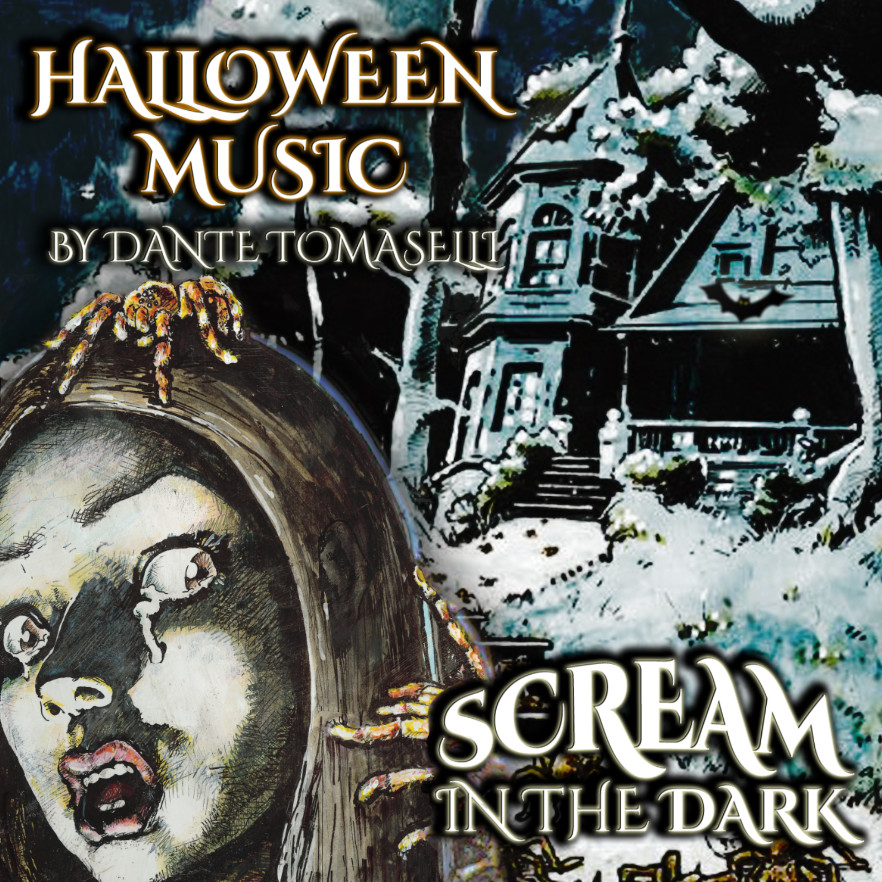 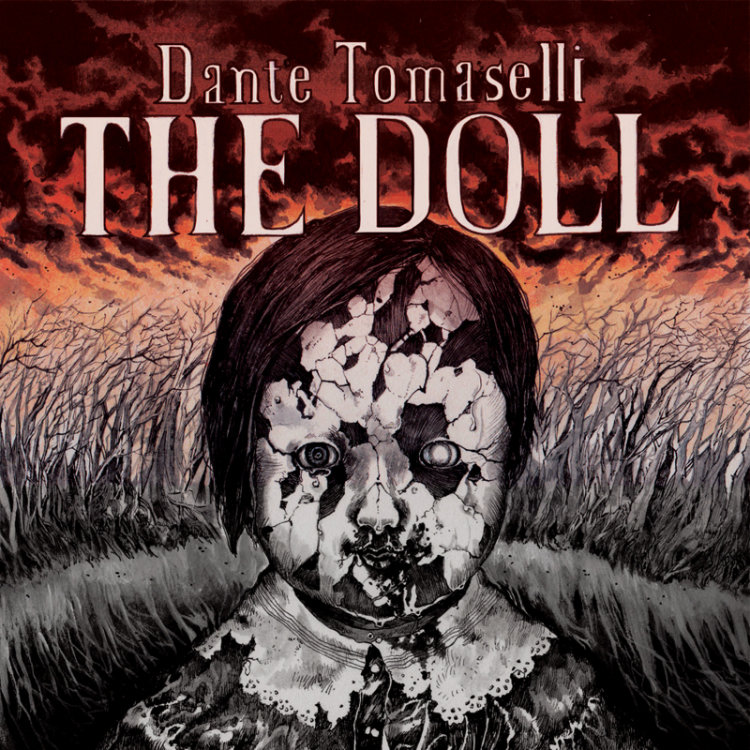 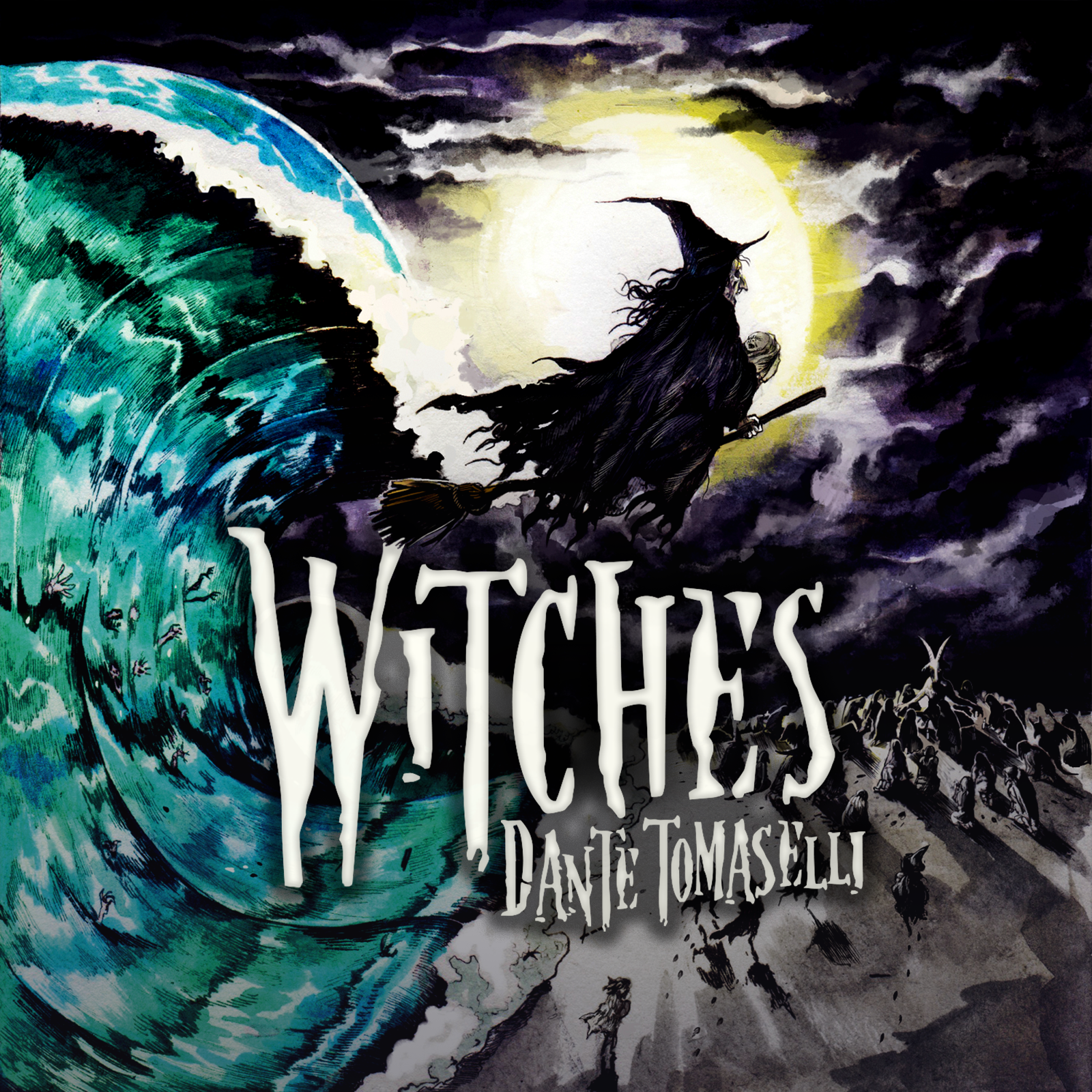 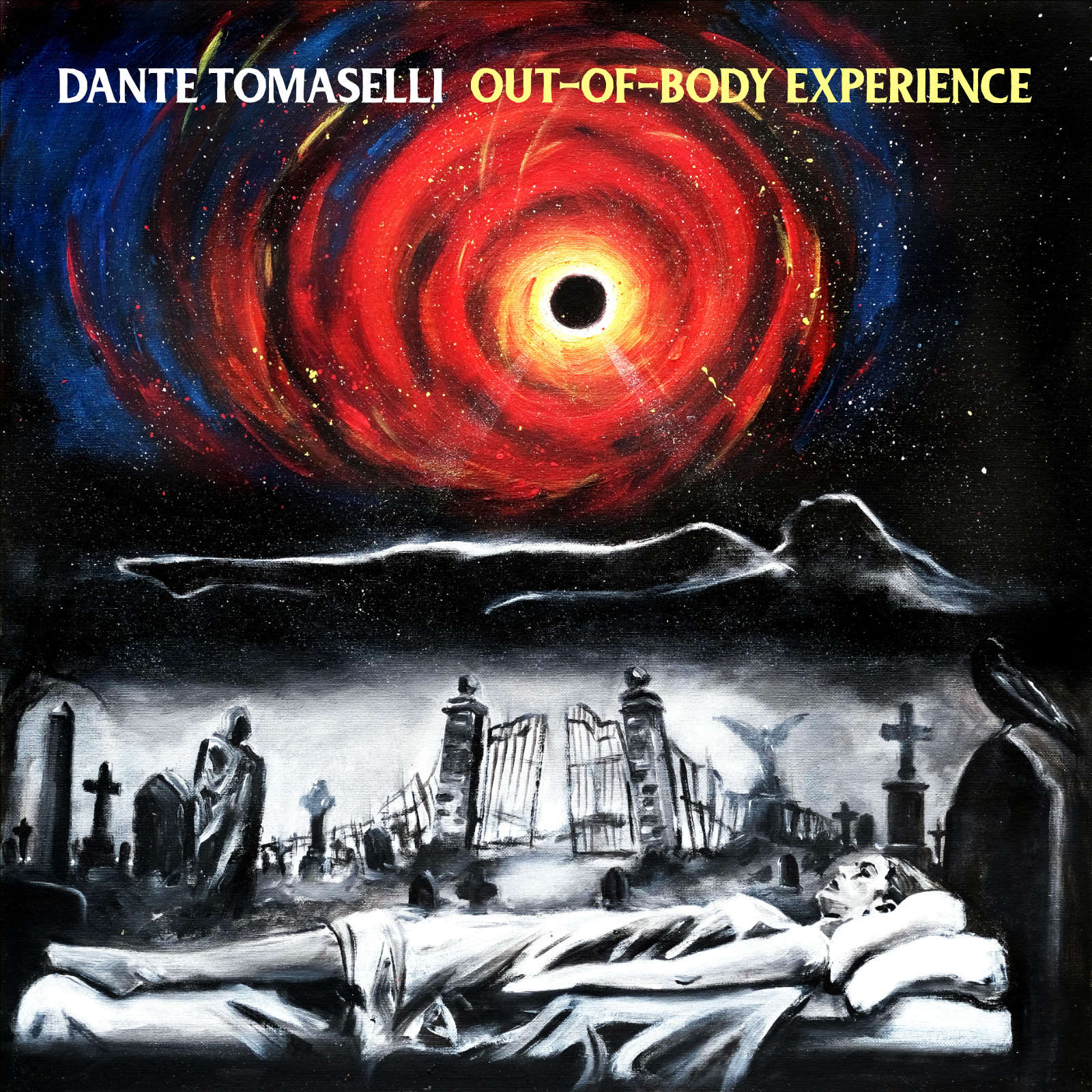 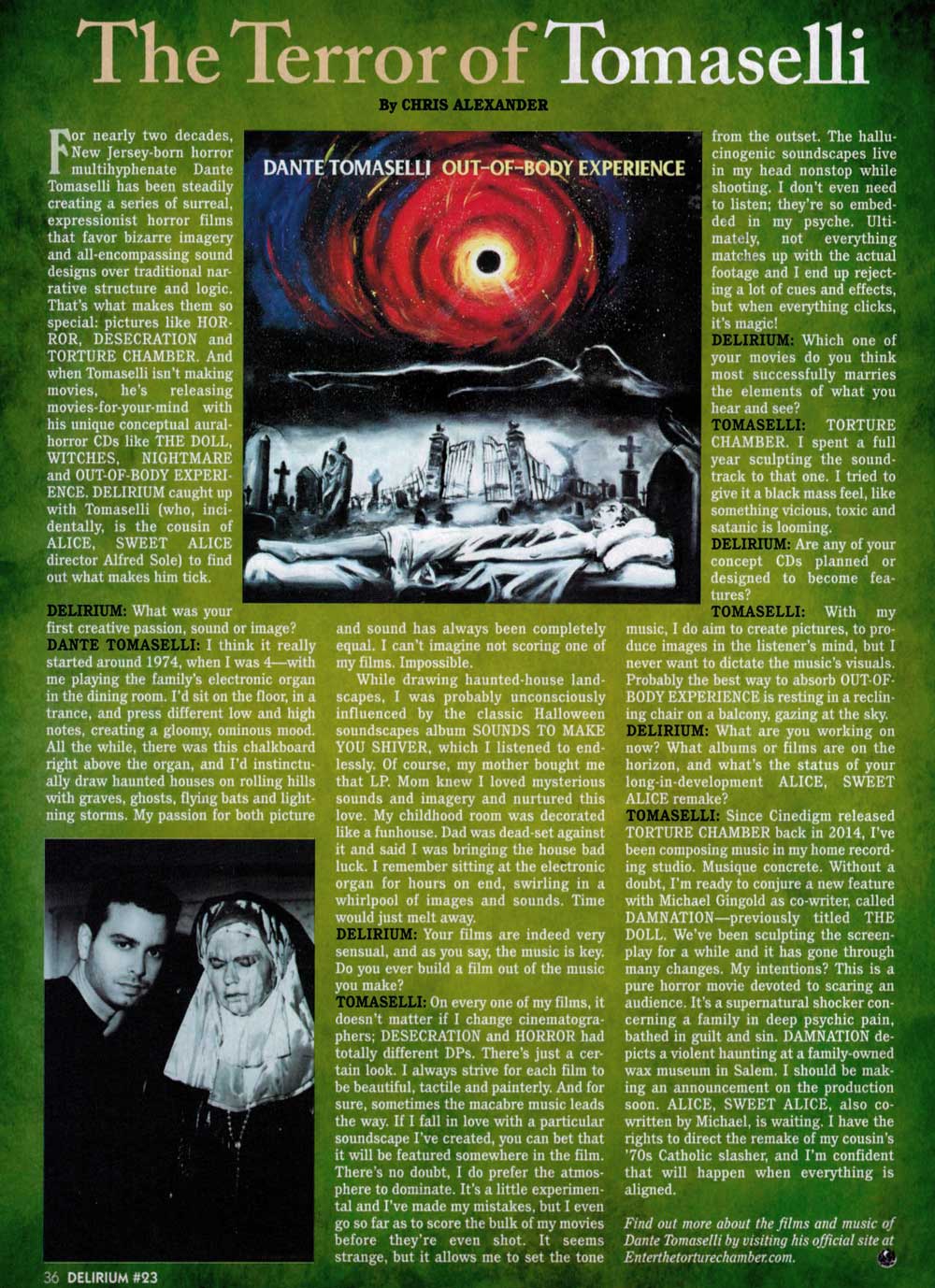 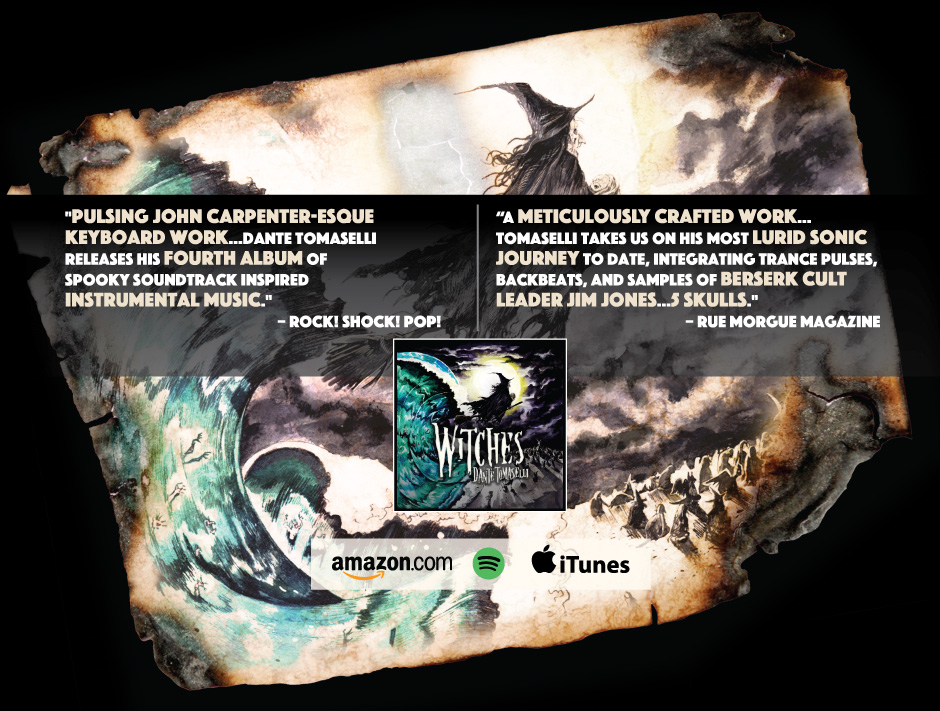 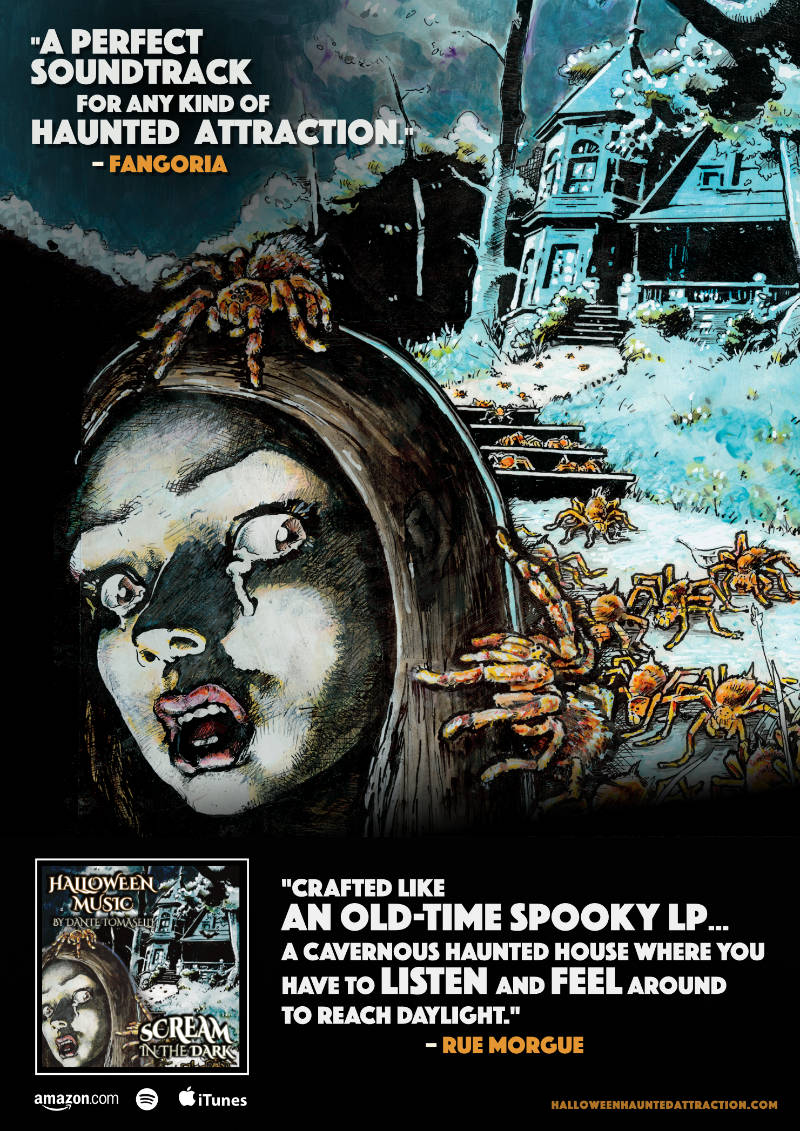 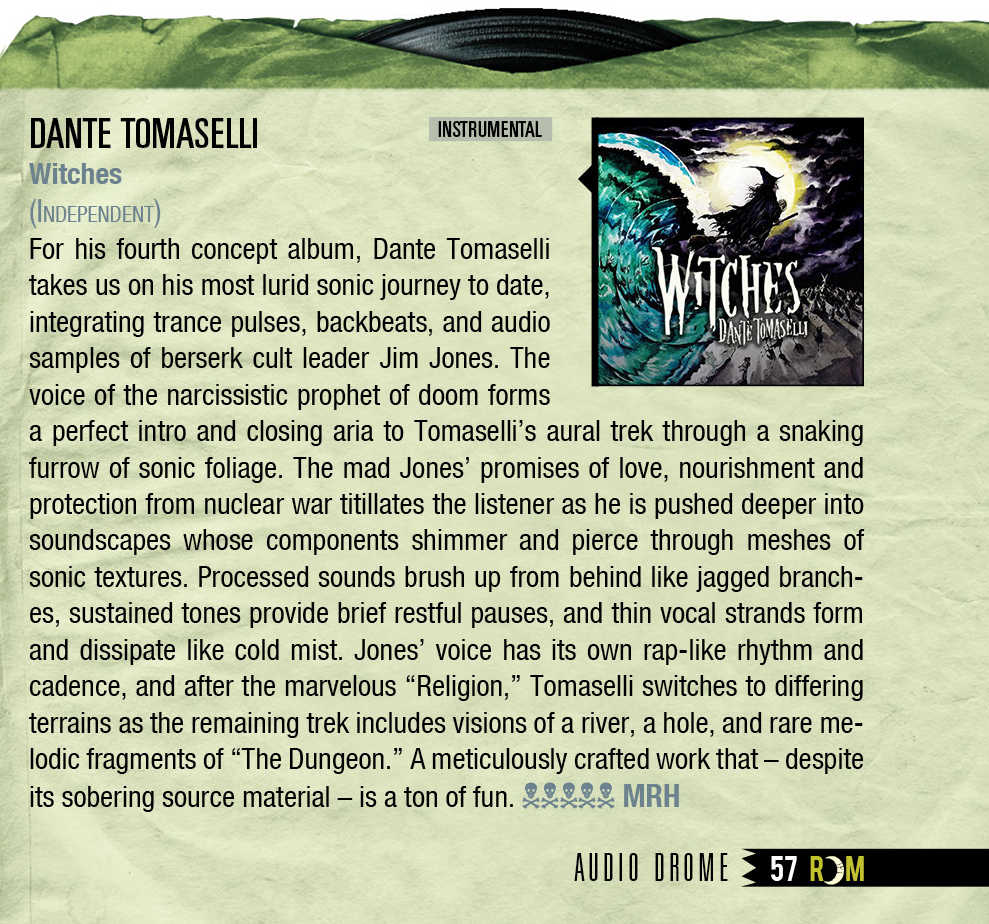 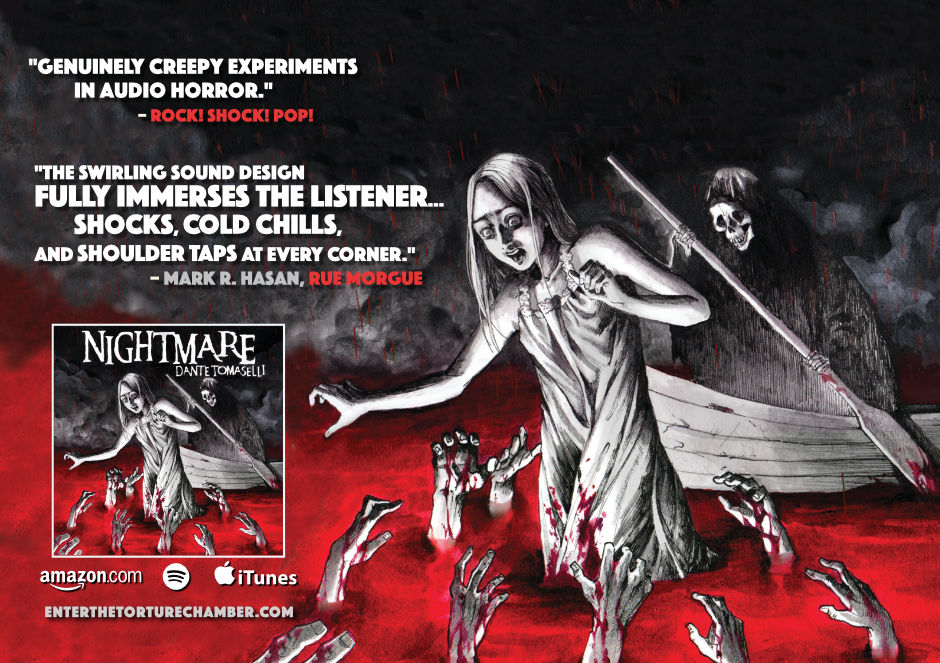 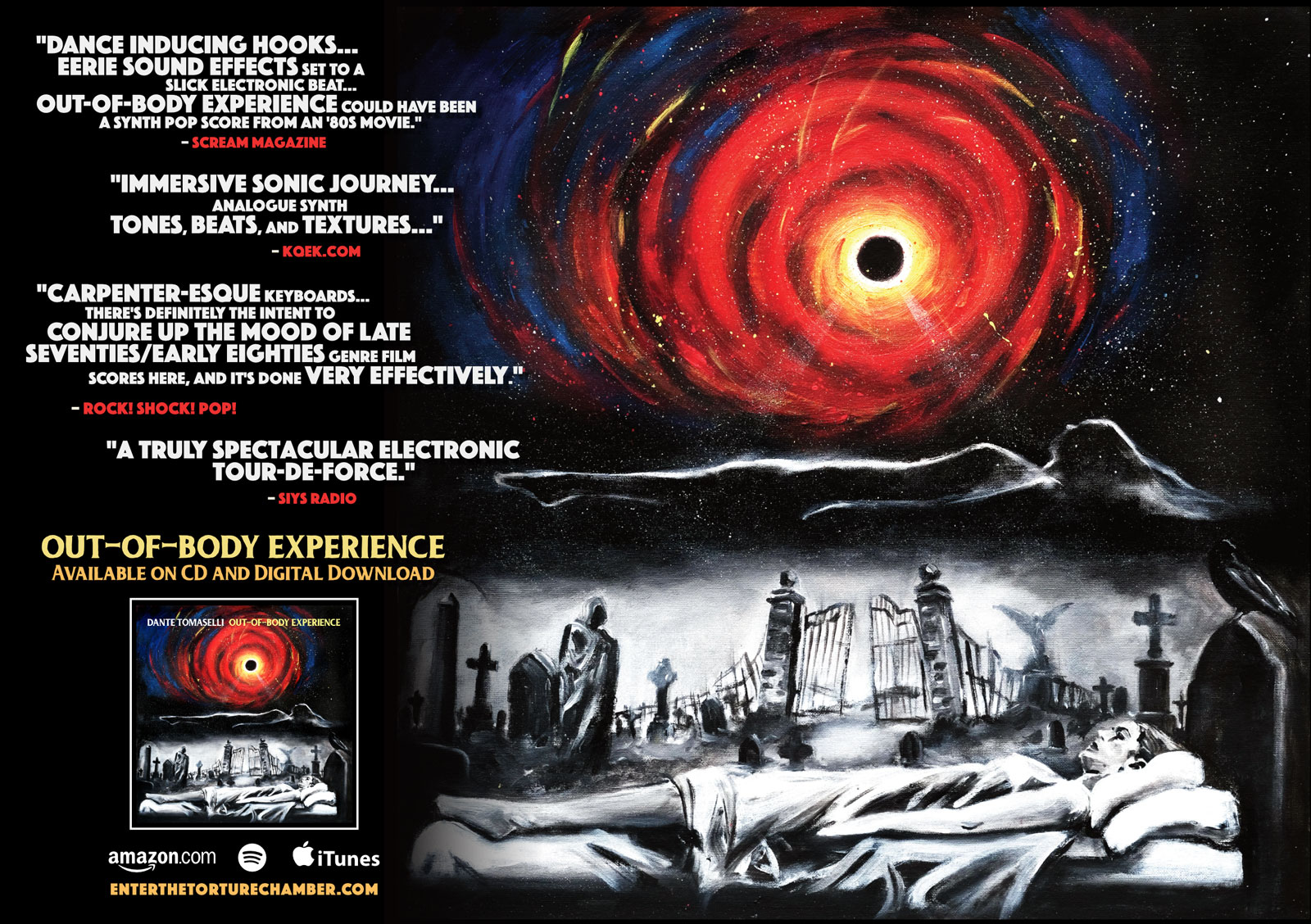